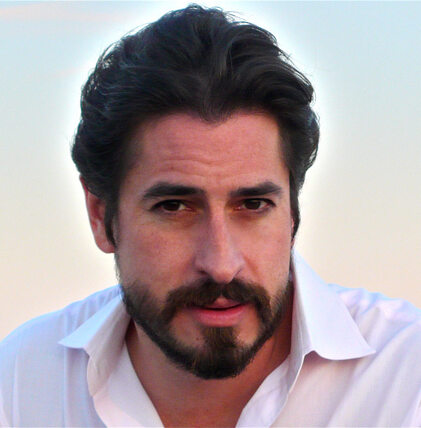 Matt Saldivar is from West Point, NY and lives in New York City.  As an actor on Broadway, he most recently originated the role of Alphonse Mucha in the Roundabout Theater production of Bernhardt/Hamlet starring Janet McTeer.  Other principal roles on Broadway include Saint Joan for Manhattan Theater Club, Junk at Lincoln Center, Black Stache in Peter and the Starcatcher, Act One at Lincoln Center and A Streetcar Named Desire.  He originated the role of Johnny Sandwich in the Broadway musical Honeymoon in Vegas with Tony Danza, played Kenickie in the most recent Broadway revival of Grease and originated the role of Sammy in the Broadway premier of The Wedding Singer.  He played Luther Billis in the 1st National Tour of the Lincoln Center production of South Pacific directed by Bartlett Sher.  Off- Broadway and regional credits include Hermes in Hadestown at New York Theater Workshop directed by Rachel Chavkin, Sam Gold’s production of Hamlet at The Public Theater starring Oscar Isaac. Frank in Annie Get Your Gun directed by Sarna Lapine, the premier of Kate Hamill’s Dracula at Classic Stage Company, Randy Newman’s Harps and Angels directed by Jerry Zaks at the Mark Taper Forum, Quiarra Alegria Hudes’ Daphne’s Dive at Signature Theater Company (NYC) directed by Thomas Kail, the revival of All In The Timing at Primary Stages, David Bryan and Joe DiPietro’s Toxic Avenger: The Musical, as well as principal roles for The Atlantic Theater Company, The Shakespeare Theater Company, Manhattan Theater Club, The Guthrie Theater, The Long Wharf Theater,  Williamstown Theater Festival, New York Theater Workshop, The New York Shakespeare Festival, LAByrinth Theater Company, Theater for a New Audience and City Center among others.  Film and Television include: Gordon in Rent: Live on Fox, Live from Lincoln Center, The Other Two, The Good Cop, The Code, Elementary, Law and Order, Savages, Tony and Tina’s Wedding, Boiler Room, All My Children.  He earned a double BA from Middlebury College in Theater and Spanish and an MA in Spanish from the Middlebury College Summer Language Program.  He earned an MFA from the Tisch School of the Arts Graduate Acting Program at NYU.  He is married to the director Sarna Lapine.
Powered by